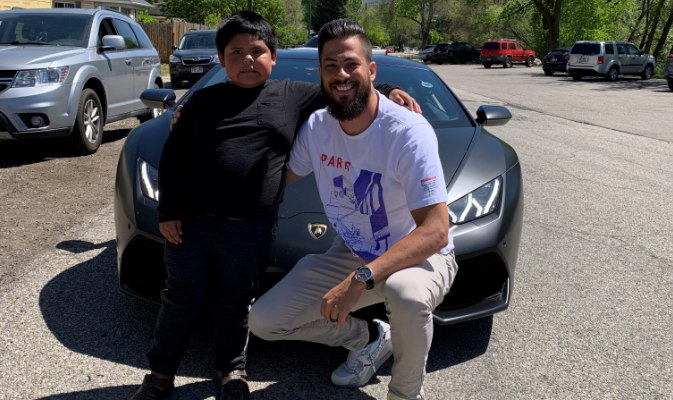 We have all heard of stories of all the crazy things that children do in their childhood. But this story of what a five-year-old did is not your everyday childhood story story. One fine day, in the town of Ogden, a five-year-old suddenly decided that he wants a Lamborghini and he is not going to rest until gets one. Like every other child, Adrian Zamarripa first tried to convince his parents to get one for him. And just like every other parent, they refused. After being rejected by his parents, he then decided to go to his sister who lives in California. For this purpose, he decided that Dodge Journey, the family car, would be the best option. Not only that, he also decided that he’s going to be the one who’s going to drive it there. He had hardly traveled 3 miles when Rick Morgan, the trooper of the state, pulled him over for erratic driving.

At first Morgan that the driver was either drunk or had used some drugs, as he was not stopping. In order to get the driver’s attention, he used the lights and the siren of his police car. Thankfully, the driver immediately pulled his car over to the roadside. To his surprise, and as well as everyone else’s, the driver wasn’t drunk. Instead he was inexperienced, not to mention too young to drive.

Seeing this, Morgan parked the car and also called Zamarripa’s parents as well, who reached the location after some time to pick up their son and their car.

Later on, when the incident was being reported on the KUTV, the child’s sister, Sidney Estarad, said that Zamarripa waited until she had gone to sleep to get the keys.

It is important to realize here that although his passion and enthusisasm is to be praised, but his behavior was wrong. He might have ended up causing some serious accident if he was not stopped on time. And who knows someone might have gotten seriously hurt as well. Thankfully, none of that happened and everyone went home without safely. If anything, this is just another reminder for parents as to why they need to keep things like car keys away from children’s reach.

The story just doesn’t end here. Zamarripa might have been too broke or young to own a Lamborghini but he certainly isn’t all that to ride one. The news reached Jeremy Neves, who unlike Zamarripa , actually owns a Lamborghini, and decided that he is going to reach out to this kid and maybe turn some part of his dream to reality. For this he gave the kid the opportunity to go for a ride with him in his Lamborghini Huracan.

“Maybe he’s getting punished, maybe he’s grounded, maybe he’s got some chores to do. I can relate to that,” Neves told Utah news station KSL. “At the same time, I thought it would be really cool to say, ‘Your dreams aren’t as far away as you think they are. ‘”

A blessing is not a blessing until its passed on, Please Share this: